CAROLINE AND THE CAPTAIN

Regency Novella. Captain Nicholas Bonham of Wellington’s Peninsular Regiment, the 52nd Light Infantry, returns from fighting the Napoleonic wars to see his brother laid to rest. A skilled rider, George’s death remains a mystery, as does the parlous state of his finances. Debenham Park must be sold unless Nicholas can find a swift solution.

George’s former fiancée, Miss Caroline Mirringham, harbors a secret. She has trusted no man except her father and George, and now considers her future to be a desolate one. When her father proposes that Caroline marry Nicholas, she is filled with horror. The captain is nothing like his amiable brother. He looks altogether too strong and harsh. He would demand far more from her than she could give.

Gloves clasped in his hands, a black armband gracing the sleeve of his uniform, Captain Nicholas Bonham watched the coffin bearing his elder brother, George, Earl of Debenham, lowered into the ground. Nicholas was glad his mother hadn’t lived to see this day. George had been her favorite. It was impossible to tell what his father’s preference was if he’d had one. He’d been a cool man who didn’t show his emotions and was more involved in politics than family life.

The wind whistled through the trees, and a cold drop of rain splattered onto Nicholas’ cheek. Dashed English weather, couldn’t the shower hold off for an hour or two until George was decently buried? He angrily swiped away a tear. He’d been away fighting in Wellington’s Peninsular Regiment, the 52nd Light Infantry, and hadn’t been back to England to see George in years. Now there was no chance of it.

His neighbor, the Baronet, Sir Marcus Mirrington stood amongst the small crowd with his wife and daughter. Miss Mirrington had been engaged to George when he suffered a fatal fall from his horse. She stood silent, her pale face partly hidden by her black straw bonnet. It was not usual for a young lady to attend a funeral. She must have insisted she be allowed to come. However, when she raised her chin to observe him, Nicholas could detect no sign of anguish in her still features. Her marriage to his brother had been arranged for financial reasons, as the Mirrington and Debenham properties ran together on the western boundary. His brother was an amiable fellow, might she have loved him?

Amiable, but lacking a good financial head on his shoulders. George would not have wanted to leave Debenham Park in such a sorry state for Nicholas. He would rightly feel, at thirty-two, that he had years to rectify it. George admitted he’d never been good at handling the estate’s affairs. He was too trusting. When he’d left the running of the estate to his manager, the fellow had absconded with a large sum of money, and that, coupled with poor crops, and the sorry state England was in after years of war, the coffers of Debenham Park were now severely depleted. Not Dun Territory quite yet, but not far off, it seemed, unless something could be found quickly to remedy the situation. Nicholas hated that the tenant farmers were struggling with ramshackle cottages and not enough coal for next winter. He’d found a pile of tradesmen’s bills unpaid.

George’s marriage to Sir Marcus’ daughter would have brought about the joining of two fine estates. The fact that the Debenham name could be traced back to Tudor times when the estate was gifted to Nicholas’s ancestor by Henry VIII, was undoubtedly attractive to the immensely wealthy, newly knighted baronet, for he had offered a much-needed infusion of the ready, in the form of a lavish dowry.

As Caroline was their only child and there was no entail, his estate, Mirrington Manor would one day have been George’s. A very attractive option, which George apparently had had no hesitation in accepting. Nicholas studied Miss Mirrington. Willowy in her dark-blue pelisse, she stood beside her mother in black bombazine. He wondered why Miss Mirrington hadn’t married long before she met George, as her first Season would have been five years ago.

Apparently, when his back was to the wall, George had borrowed against Aunt Hetty’s inheritance. Foolish in the extreme, for Aunt Hetty was like all the Debenham’s—or at least those who didn’t die of an accident or on the Spanish plains—likely to live to be ninety. And good luck to her, Nicholas thought, with a fond glance in her direction, for a livelier lady he had yet to meet. She was one of the few who would remember Nicholas and George when they were lads.

Nicholas stepped forward to sprinkle a handful of earth over the coffin, followed by the other mourners. The sound of dirt thudding onto the lid had a terrible finality about it. George’s dreams would now never be fulfilled.

Caroline surreptitiously studied the captain in his striking, scarlet infantry uniform, as he stood by the graveside. How different he was to dear George. Nicholas was a head taller, his broad shoulders slumped in grief, his face angular and somber where George’s had been pink and English and cheerfully round. A scar marred the smooth, tanned skin of one sharp cheekbone. The captain looked altogether too strong and harsh. Dangerous and unpredictable. He held his Shako under an arm and his brown hair, streaked blond by the sun, ruffled in the damp breeze. A curved sword hung at his side.

He cast a dismissive glance in her direction. Might he blame her in some way? She straightened her shoulders and sniffed back a tear. George was gone, along with her safe haven. She bit her lip at her own needy selfishness. But what would she do now?

The funeral service concluded. “A sad business,” her father murmured. “Come, my dears.” He ushered her and her mother to their waiting carriage.

Amazon reviewer: This is a wonderful novella!
“I sighed with contentment. Maggi Andersen has written another fabulous book!” 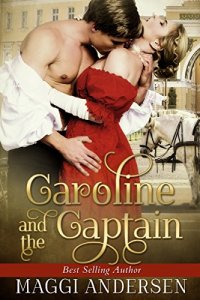 Captain Nicholas Bonham of Wellington’s Peninsular Regiment, the 52nd Light Infantry, returns from fighting the Napoleonic wars to see his brother laid to rest. A skilled rider, George’s death remains a mystery, as does the parlous state of his finances. Debenham Park must be sold unless Nicholas can find a swift solution.

George’s former fiancée, Miss Caroline Mirringham, harbors a secret. She has trusted no man except her father and George, and now considers her future to be a desolate one. When her father proposes that Caroline marry Nicholas, she is filled with dread. The captain is nothing like his amiable brother. He looks altogether too strong and harsh. He would demand far more from her than she could give.

Since high school, Regency romance has been one of my favorite subgenres of romance. Although it may be an illusion, this time period appears to be a more innocent, romantic time than our current day and age. (Just as medieval times do.) Of course, this isn’t true, but it still holds that mystique. Unfortunately, over the past several years, finding good Regency romances has become a challenge, which is why I was delighted when I found Ms. Andersen’s Caroline and the Captain.

Captain Nicholas Bonham is an alpha hero, but in the best possible way. Yes, he’s arrogant and commanding (some of that is the time period), but he’s thoughtful and caring. Unlike some alpha heroes, he doesn’t run all over Caroline because “he knows what’s best and what’s best for her is what he wants.” He’s come back from the war because his brother George has died in a riding accident and is dealing with not just grief, but disbelief that George died so young and the financial state of his childhood home is in shambles. For any other man, it may drag him under, but, for Nicholas, his nature won’t allow that to happen, even if it means marrying a stranger who happens to be his brother’s fiancée.

Miss Caroline Mirringham has her own problems. Before George’s death, her future was figured out for her. Marrying the gentle George worked perfectly for her battered spirit and made her father happy. Although beautiful in her own right, too much has happened for her to see it. Nicholas is not safe like George. He stirs all kinds of emotions and cravings that scare her. Ultimately, they will bring her happiness, but until they can do the dance and learn to trust themselves and each other, their relationship will continue to cause grief and stress for both of them.

While I believe that most readers will figure out her secret fairly early in the book, I’m not going to discuss it in this review. You must read the book to discover it for yourself. (smile)

Ms. Andersen has set the stage for a traditional Regency romance with a few untraditional elements. You have a hero, a heroine, and a bad guy that eventually shows up and helps the hero and heroine realize what they could’ve lost and how important it is to grasp happiness when they can—in true romance fashion. The author also throws in some situations that were probably much more common during that time than we care to believe, or admit, could have happened that give a depth to this otherwise delightful, straightforward romance.

“Caroline and the Captain by Maggi Anderson is a beautifully written Regency era love story with visually pleasing descriptions and believable dialogue. In addition to the story of finding love, the plot has an element of mystery, suspense and danger. There is a marital bedroom scene. (5.0 stars)” Amazon Reviewer.